Biology up, costs down the value of managing soils 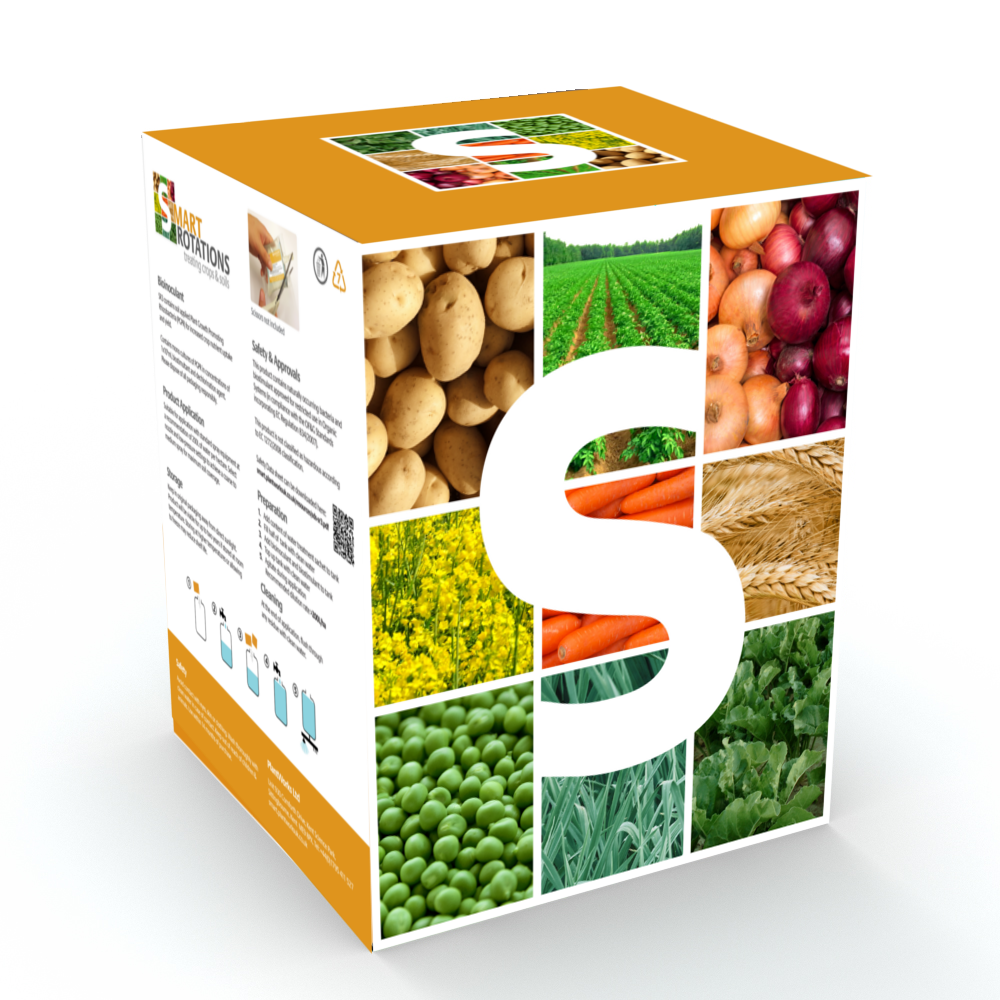 Lets get straight to it and ask a simple question. ‘Is there a monetary return to be had from managing the biology of your soil?’

With every major agronomy company now having expanding soils programs and Government, post Brexit, replacing the common agricultural policy subsidises with payments in part based on environmental empathy, what is the strategy that underpins this?

In the spirit of minimum tillage let us not dig too deeply into our current predicament in relation to soils, that said, it is worthy of reminding ourselves of some of the basic facts. Only a very small proportion of applied fertilisers is ever used by our crops, our current farming practices in relation to rotation selection and chemical usage have acted to reduce the biodiversity of essential microbes in our soils, soil organic matter is reducing at an alarming rate and we have a worryingly short period of time to reverse this trend.

Amidst the many scientific terms used to describe the complexity of soil science the one theme that is becoming ever more prominent is the concept of ‘plant efficiency’. Put simply it is a recognition that a plant, when it has an appropriate biological community of microbes at its roots, is better able to use both native and applied nutrition. This is a fundamental concept that once comprehended begins to lead our thinking about contemporary farming, for if a plant is more efficient it will be healthier, its systemic defence systems will be stronger, it will yield more and in relation to the soils, year on year things will get better.

All things considered and hopefully understood, what can we do as an industry to redress them? Well the ‘long game’ in this story is being supported by the major soils programmes offered by agronomy companies that seek to offer to measure of current soil status on farms, and put plans in place to change practices and planting programmes to increase the biological function of soils.

So it could be argued, we have the terminology, we have direction, but what can we do this coming spring? Recent data from NIAB TAG research and other industrial sources on the use of biofertilisers shine light on the first real practical soil interventions for use by UK farmers.

The UK has actually been working on the use of biofertilisers for many years. For the sake of clarity, we are not talking biostimulants, although they are often mentioned in the same breath, but rather biofertilisers comprise of living beneficial soil bacteria or fungi. Many companies are involved in this research and product development globally, leading this in the UK is PlantWorks Ltd, a spin out from a university some twenty years ago. Its science team have been refining soil bacteria and trialling them in UK soils for many years.

The company’s SMART ROTATIONS range includes both mycorrhizal fungi products and plant growth promoting rhizobacteria (PGPR) all produced at its production facilities at the Kent Science Park using controlled growing rooms and bioreactors. The company has spent years running laboratory trials to further understand the functioning of these beneficial organisms, both alone and in consortia, and have developed and tuned a number of products for use for crops grown in UK climate.

Initially the company focussed on quantifying how its liquid bacteria products, sprayed to ground post emergence, could increase yield of crops by solubilising phosphorus, fixing and capturing nitrogen and making plants more efficient in up taking those nutrients. More recently, in collaboration with all major agronomy companies, and using its own monitor partner farms, it posed the question ‘with the biology of the soils increased how much applied nitrogen can be reduced in wheat production and what is the profit achieved?’

For those not familiar with the SMART ROTATIONS SR3 products, they are a range of tuned consortia of beneficial soil bacteria selected and tested for their ability to fix nitrogen and solubilise phosphorous. PlantWorks supplies these bacteria in sterile infusion bags taking the bacteria directly from their controlled laboratory bioreactors. The company are at pains to point out that these are not compost ’teas’, but rather pure pharmaceutical grade bacteria grown in a very stringent conditions to an extremely high efficacy point, for those interested in such things the measure of potency is referred to as Colony Forming Units (CFUs). The products are supplied typically in 5 hectare units with 1 litre of biostimulant used as a feed source for the bacteria during establishment. SMART ROTATION SR3 liquid bacteria is applied to the crop post germination, for winter wheat planted in 2020 the ideal time to treat will be in early spring 2021 (GS25-GS31)

There has been a considerable body of work in the UK on the use of bacteria on wheat over recent years, both winter and spring, looking at the increment in yield alone without modulation of inputs. From a number of trials, across the UK using differing wheat varieties the average increase has been in the region of 6.0%, again attributed to improved plant efficiency

Studying the results on winter wheat KWS Zyatt the application of the beneficial bacteria shows an obvious direct effect on yield at the 100% nitrogen rate which is applied here at 260Kg/ha. Interestingly, as the nitrogen rate is reduced, the yield is actually maintained. 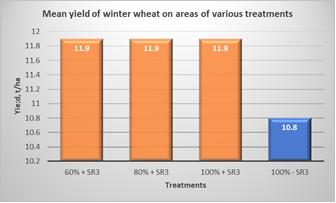 Comparing the percentage increase in yield to that the yield from the 100% nitrogen rate without bacteria application from two sites, one conventional and one regenerative, again, we see very strong correlation, which is statistically significant for those with a mathematical leaning. 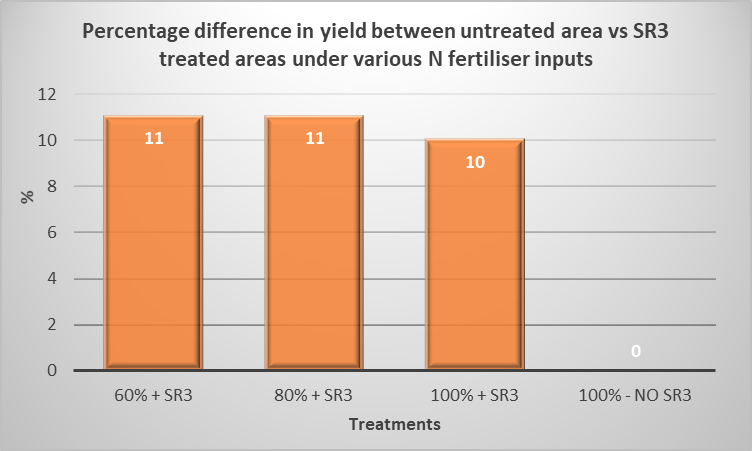 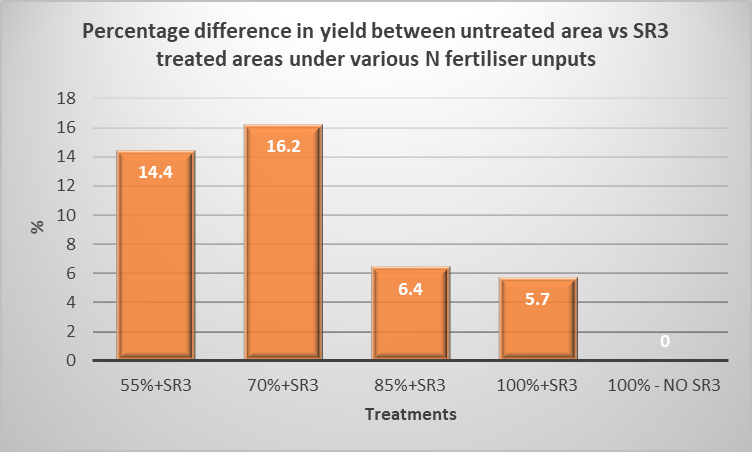 Data taken directly from the combine on both farms show a consistent increase in yield when the biology in the ground has been enhanced. In the conventional system the results range from between 10-11% increase with greater variation in the regenerative system albeit the average increase is very similar.

Taking into consideration the costs of the bacteria, typically at farm price of £20/ha and the extra spray run costs, reducing nitrogen inputs based on this data would achieve and incremental profit of £236/ha in the conventional system and £202/ha in the regenerative system, all whilst reducing the nitrogen loading on the soil.

Here a negative control is shown with wheat planted without any nitrogen input and not unsurprisingly the yields are considerably lower than those where nitrogen is applied. The data in relation to yield at different nitrogen rates is though fundamental and may cause many to reflect on their standard assumption when it comes to nitrogen best practise. Very little difference is shown in relation to yield, and indeed on wheat protein levels, when nitrogen is reduced from the standard 250kg/ha to 125Kg/ha. In all cases, where bacteria are applied, there is a clear uplift in yield, at approximately 5%. 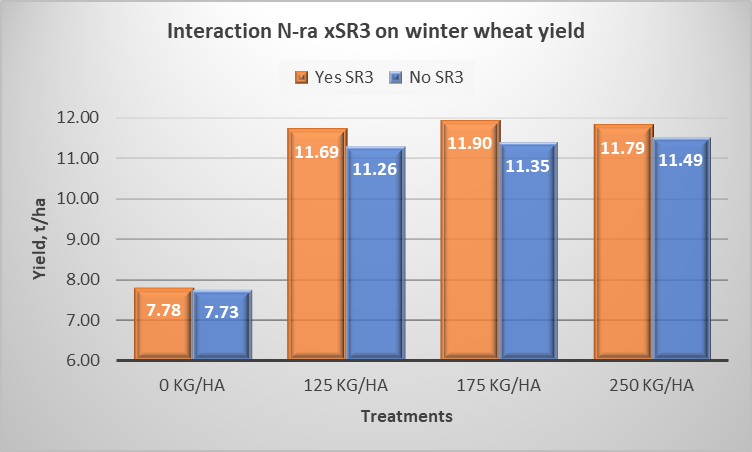 Globally the market for bio fertilisers is reported to now exceed $1 billion a year. Not unsurprisingly industry is returning again to look at the natural biology in soils as a source of new products with the goal of enhancing ‘plant efficiency’.

The SMART ROTATIONS range of products can be purchased through all major agronomy suppliers. For further technical advice contact: 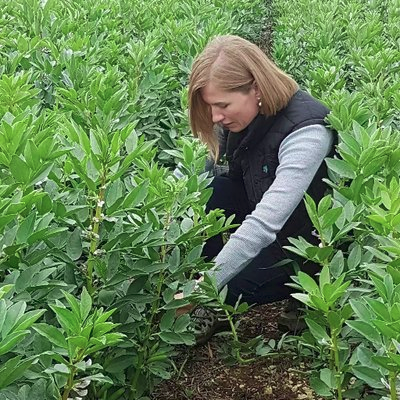