‘It was a new day yesterday but by God it’s an old day now’. The briefest of reflections on the COVID I could dream up, courtesy of Jethro Tull (worthy of pointing out to the younger audience not the chap that developed the seed drill).

While we struggle to find any positives from the last year, I would reflect on a discussion between a leading agronomist and a large Cambridgeshire farmer on the hugely popular Amazon Primes’ Clarkson’s Farm series. I was expecting to hear some critical comments about this, a program that I thoroughly enjoyed, for sure there were some lack of efficiencies on show at times, but to my surprise both men were both great fans. Not only because Jeremy showed the sheer level of graft that it takes to farm in the UK, and the complexity involved, but also because he showed a willingness to try new things, planting new crops, laying down greening areas, an innovative spirit that both men commented is prevalent on many farms as we move through a significant shift in farming knowledge and a change in practices.

Another light at the end of the dark spring was Groundswell. I could not have been the only person reflecting that it was like somebody had taken their finger off the hands of the clock and set it ticking again. This event continues to impressive, both in terms of scope and the growing numbers of audience attending. This year over 4000 farmers and interested parties wandered the various lecture tents and spoke with exhibitors.  It is clear that in the quest for better management of our denuded soils, scientist and growers alike are challenging some of the ingrained practices developed since the mid-20th century. Noteworthy also was the presence of all the major agronomy companies each offering extended soil management programs, all focussing on different aspects and levels of biology in the soil. This in addition to the Groundswell Agronomy team also being on hand dispensing their own brand of knowledge transfer for the duration of the show.

More so than any other farming event Groundswell is planted firmly on the value of healthy, functioning soils, with a goal of promoting both a better understanding of their importance and how this, the greatest of all assets, can be managed sustainably.

A core theme of the over one hundred talks at the show was the value of soil biology, and its role in increasing a crops’ efficiency of taking up nutrients and water. So where are we in the practical management of soils biology? Well understandably the first question posed by many is, ‘How do I know the level of beneficial biology in my soils’? Soil organic matter remains the good proxy for biology soil health as it defines a measure of retained soil carbon through a balance of both organisms and vegetation in the soil and their natural decomposition. 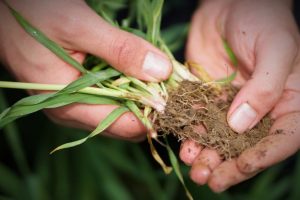 At the organism level we have the worm counts, that all farmers are familiar with. Although studies have defined optimum worm counts, practically speaking a farmer needs to take a year-on-year measure of improvements. At the microbe level things become more difficult and yet here is where much of the breakdown of soil chemistry is taking place; as these microbes break bonds that lock nutrients in soils and convert soil nutrients to plant available forms.

Genetic tests, performed on soil samples, are available using primers for different micro organisms  that can accurately quantify the biological background of certain species however these can be expensive and limited to laboratories and may be more of academic interest. General primers for common genetic markers are more generally used when reviewing fungi and bacteria in soils to offer an overall picture of populations, as can the measure of cellular / metabolic components.  A tier below this level of detail are field testing kits, some reporting in less than a few hours, that define the general level of fungi and bacteria in the soils, often expressed as a ratio.

The soil is home for many organisms, good and bad and although these tests do not offer details of these, they do offer an overall datum of soil microbial life. There are no defined optimums for net bacterial and fungi levels or ratios in soils, although highly productive agricultural land generally tend towards a 1:1 ratio or err to a bias towards bacteria. These measurements are therefore useful when used as tools to measure improvements in soil life post soil management changes. The onus remains on the farmer to map their soils and to correlate soil structure, organic matter, and biology to yield, or in the modern world to profit, as a myopic maximum yield focus some would argue is the root of soil decline.

In relation to practical soil biology management there are simply two paths to travel. Changes to better and more harmonious (or balanced, possibly involving livestock) rotations and the use of biofertilisers – simply products with living fungi or plant growth promoting rhizobacteria supplied on some form of carrier or suspension.

Changes in rotation and field amendments will depend on a road map of the current nature of the soil and where the goal is set. To define this path all farmers should understand how microbes’ function with their target crops. Arguably the king of fungi is the mycorrhizal fungi; responsible for locking in one third of all soil carbon these fungi offer a common root system to crops and support greater nutrient uptake and drought tolerance. These fungi do not associate with all commercial crops, OSR, Sugar Beet and Brassicaceae not being hosts. Equally crops that require significant soil disturbance (cultivations), such as potatoes, break the fungal structures and reduces the effectiveness of this established hyphal network. Exploring means of intercropping to ensure the fungi always have an appropriate host or, where practical, using a cover crop with mycorrhizal fungi added after harvest, to redress the losses of the season are some options to consider.

Plant Growth Promoting Rhizobacteria are free living and are therefore less host dependant, although they replicate more readily in the presence of root exudates. Recent work has shown that specific consortia are required for different crops, these organisms act to fix nitrogen, unlock phosphorous and produce natural plant growth hormones.

Considered by many to be the most relevant of the biofertilisers, these are usually applied to soils as they warm up in the early stages of crop development. Recently reported 2019-20 trials in the UK provide replicated results showing uplift in yield following the use of biofertiliser in winter wheat. In addition, wheat trials have shown that by enhancing the soil microbiome with rhizobacteria farmers are able to reduce their nitrogen inputs by up to 25% and still maintain yield and quality.

So, back to the telly with Mr Clarkson and his team. You have made a truly great start! If we could nudge you a little further in the direction of sensitive soil management in the ensuing series, you could really help move regenerative farming in the UK further forward; as well as making our Sunday evening viewing even more enlightening.